AutoCAD batch scripts can be powerful by themselves, but if you couple that with the ability to apply them to a multitude of drawings then it can be really powerful. I first saw the power of scripting while using the “Core Console” in 2013 and made a post about it found here. But then realized that there was some limitations and one in particular was its inability to process OLE objects.

Script Pro is still pretty nice, but from my testing a batch processor called “Hurricane” I have grown fond of its built-in functions and scripts. There is a new version available called “Hurricane MX” but I have only used the older one which is just fine for me.

So I decided to try a batch of drawings using Hurricane and sharing the results with you.

Shown below is the folder of drawings to be processed.

Shown below is the main interface of Hurricane. It is somewhat straight forward but takes time to get to learn just like everything. Specify the files (individual or entire folder) 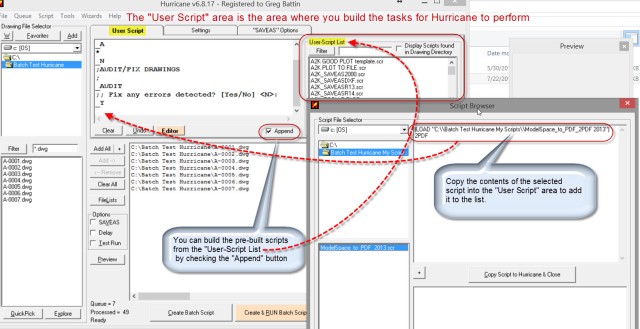 As shown below, the program builds a single script containing all of the steps that you define for the drawings that you selected to be processed.

NOTE – That you need to have a drawing currently open for the process to start. Just don’t have one of the drawings in the list of drawings that you are wanting to process open.

The results are shown below

And as a big relief – the drawing that contained an OLE object came out just fine.

This blog serves as a knowledge base for myself (and anyone else) so that I can reference tips & tricks that I have learned and also refer others to it as well. I hope that this blog helps you learn at least one tip to make your drafting/design experience better.
View all posts by AutoCAD Tips →
This entry was posted in Manage, OLE Objects, Scripts. Bookmark the permalink.